With a much greater variety of films and TV programmes than you’ll ever find included in your standard television package, your iPad is perfect for portable viewing. You can use the iTunes store to purchase films or a whole TV series, as well as make the most of outside apps such as Netflix to provide a wider choice of viewing options at a minimal monthly cost. Once you’ve made your purchases, you’ll be able to watch your choice of film on long journeys, on holiday and anywhere in the house, even in the garden! You’ll be able to access kids’ films to entertain the grandchildren and specialist interest films to take round to friends’ houses. Let me show you how to increase your film and TV choices at the touch of a few buttons.

About the iTunes Store

In order to buy and watch films and TV on the iPad, you’ll need to be able to find your way around iTunes. This is what the iTunes app looks like:

When you tap on the iTunes icon, the screen will look like the one below, showing lots of different adverts. Tap on either “Films” or “TV” from the bottom of the screen and you will then be able to search by category (using the menu along the top of the screen) or by putting the name of the film or TV show you’re looking for into the search bar. The search bar is located on the right hand corner of the screen, next to the magnifying glass icon. 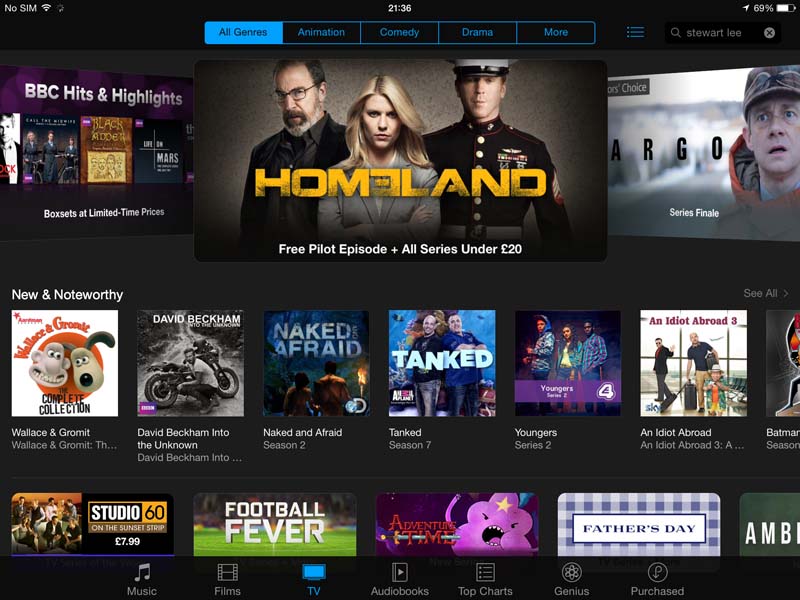 Once you have selected the TV show you’d like to buy, tap on it. You will see a description of the TV show and the price. Tap on the price to buy it. You’ll need to have a credit card attached to your iPad to make a purchase (credit cards are added in “Settings”) and you’ll need to input your Apple ID. Once you have bought it, it will download automatically. When it has downloaded, it will appear in your “Purchased” section, on the far right of the bottom menu.

To watch the TV show, tap on “Purchased”, select the show you want to watch and tap on it to watch it.

It is possible to buy a season pass for TV shows, which allows you to buy the entire season of a show before all the episodes have been officially released. By ordering in this way you don’t have to worry about missing an episode and quite often you’ll get offered a discount to buy in this way.

The season pass is only available for shows that are being shown on TV. All episodes that have been shown on broadcast TV will be downloaded immediately after purchase. For each future episode, you will be sent a notification to indicate when the latest episode has been delivered to your account.

It’s possible to buy or rent films from your iTunes store. To see the films on offer, simple press the “Films” tab. Again you can search for a film by category, or by typing the name of a film in the search bar. 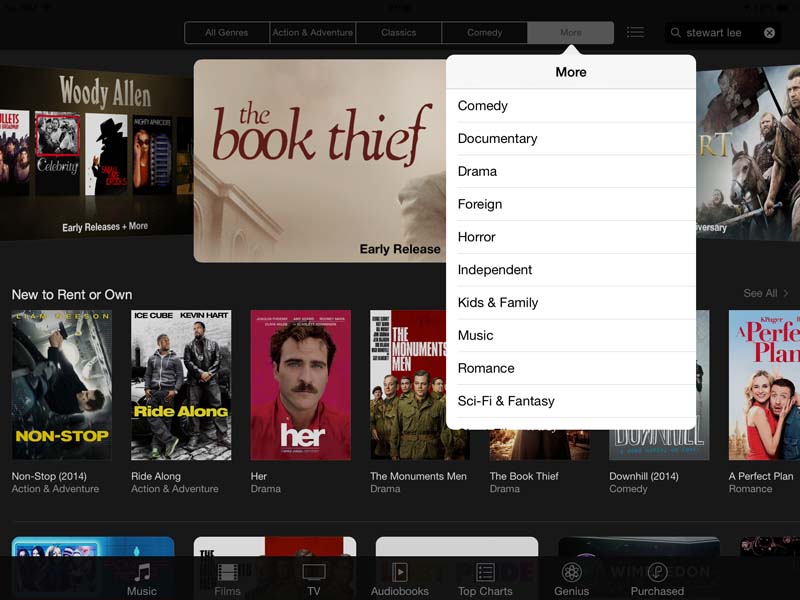 If a film is available to rent there, will be a rent button under the buy button. It’s cheaper to rent a film than buy it but it will only be available to you for 24 hours once you’ve started watching it. If you’re in the USA the rental period is 48 hours. If you haven’t watched the film within 30 days, the rental period will end.

Netflix is an app you can download from the app store. You’ll need to pay a small amount a month to access their library, but it’s a very cost effective way to expand your viewing catalogue.

Ultimately, whether you choose to use Netflix or iTunes, I’m sure you’ll agree that having the means to be able to carry your TV in your handbag, as well as the means to access a large range of films or programmes, will come in handy in a number of different situations.

IPAD101 Learn How To Use The iPad